Driving back into the park from our hotel, I’d hoped the smoke from the Merced wildfire had cleared. But the fire was still burning, and our second day in Yosemite seemed just as hazy, if not more so. How I wanted to be dazzled by a crisp, blue Sierra sky!

One of the most breathtaking views in Yosemite is from Glacier Point. Mtuseni had to see it. But I didn’t want to do the hike. (I’d done it before, and based on yesterday’s hike to Vernal Falls I knew wouldn’t be able to keep up with my young gun son.) And it felt like driving up there was cheating.

So we split up for the day. Mtuseni took the Four Mile Trail up to the point, while I explored the valley floor. Aside from my sick day in Los Alamos, this was our first day apart on the trip. We’re both somewhat solitary people, and I think we needed the break from each other.

I could have chilled by this spot all day… a new discovery in the valley for me!

I was excited to poke around the low lands, which I’d not really done on all my past visits. Yosemite’s superstar waterfalls and rock formations and trails tend to grab all the attention. Finally I had a chance to follow the river as it meandered through the valley. And to catch my breath!

I discovered some sweet spots and views that I’d never seen before. I was so relaxed and content — and it gave me a chance to recharge. I even treated myself to a nice burger at the new commissary — a major, impressive upgrade from my visits in the 1990s! 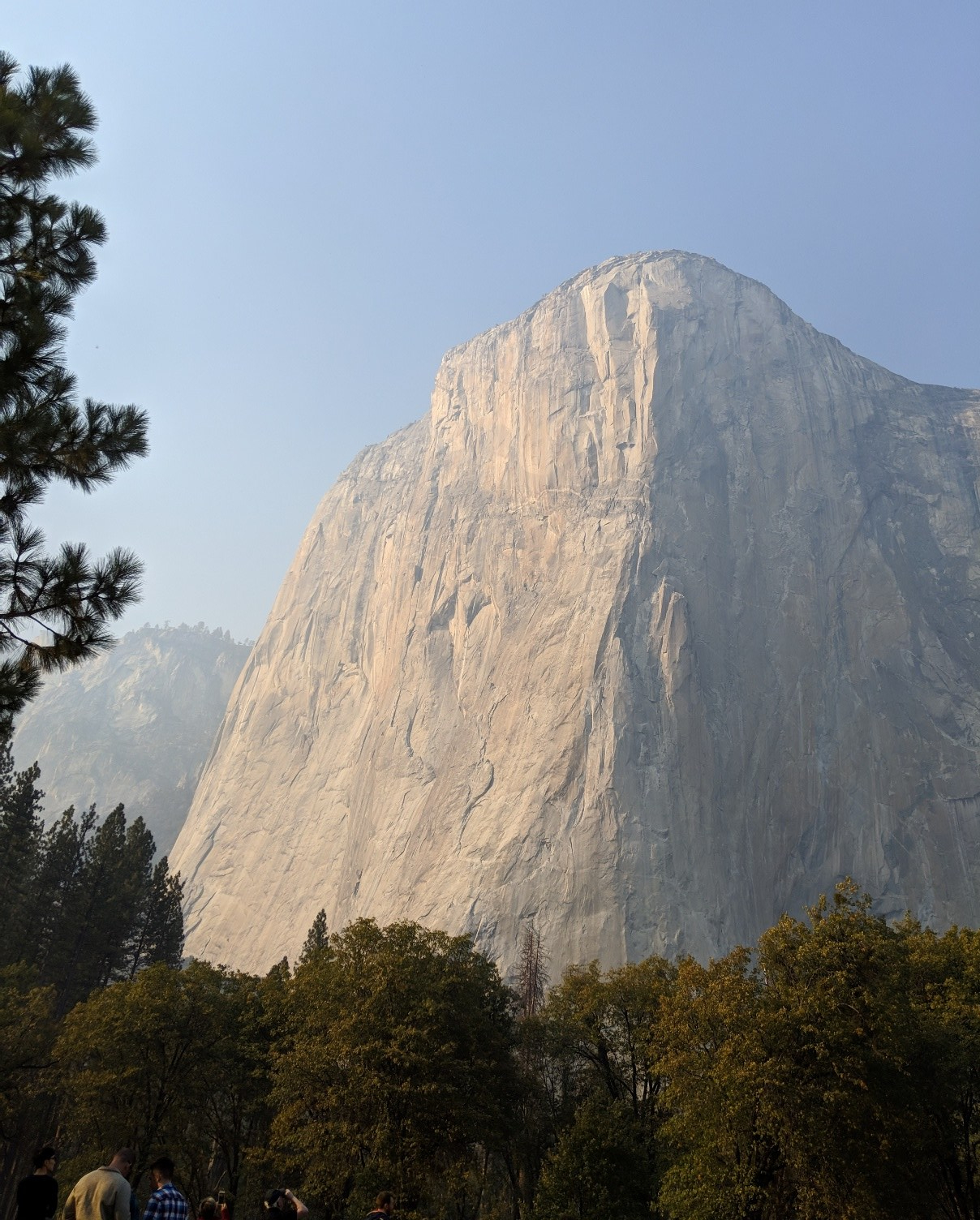 The majesty of El Capitan. I never say “awesome” unless I truly feel awe. El Cap fits the bill. You can’t see them here, but there are climbers on the wall. Just little specks. Lunatics!

Another valley discovery… this view of a rock formation across from El Cap.

Me, my spirit oak, and a hazy Half Dome. I hope my oak is still there on my next visit to Yosemite.

Meanwhile, Mtuseni headed up the trail to Glacier Point, sending me occasional updates. I warned him that it was a pretty aggressive hike, and that he’d be tired on the way back down. I would meet him at the trailhead at 5:00 and told him to plan accordingly.

Along the Four Mile Trail to Glacier Point. Note the hazy smoke in the valley.

He zoomed up the trail and was quite proud of himself. Mtuseni doesn’t do any hiking in South Africa. When you don’t have a car and you push a wheelbarrow three miles each way to pick up a canister of propane for the house, as he said, “You don’t take walks for pleasure.” He got great photos from the summit. I was jealous, but I loved my little discoveries in the valley.

The Grand Canyon… Yosemite… not bad for a kid from Drummond settlement in South Africa!

As our rendezvous time approached, he texted he was on his way down and it was “steep.” I laughed. It’s no more steep than the way up — but after a strenuous hike with a 3,000-foot rise in elevation, your knees are quivering coming down.

I waited and waited by the trailhead, as many hikers emerged. It was past 5:45. I was starting to get nervous — maybe he fell and was hurt. Then I saw him talking and laughing with two other people. They stopped and took selfies, then the others peeled off to continue down the valley. Mtuseni had met a couple from Austria on his way down. I told him people come from all over the world to see Yosemite.

Mtuseni’s new hiking pals. The world comes together in Yosemite!

I joked to Mtuseni that he looked a little tired, and he was 45 minutes late. He pointed out a park sign that said the original Four Mile Trail was redesigned to add some switchbacks — making it easier, but almost a half mile longer. Oh… okay. It was those three extra switchbacks. Right. Whatever you say. (It’s a tough trail for people who’ve never hiked.  Plus add in the elevation — not to mention the smoky air!)

As we were getting in the car, another couple approached us. They were from Germany, had just finished the trail and asked me when the next shuttle bus was. I said they’d just missed it, and the next one wasn’t for a half hour. The light was almost fading. They’d parked near Vernal Falls and walked to the trailhead. They misjudged how long the Four Mile trail would take.

I could see they were exhausted, it was a long hike back to Vernal Falls, and they had dinner reservations — which they’d never make at this point. I offered to drive them back to their car. They were so grateful, and we all had a cheerful chat in the car.

Mtuseni was shocked that I gave them a ride, but I said that hikers tend to be nice people — and Yosemite makes everyone happy and friendly. So Mtuseni not only got to stand on top of the world, he got to meet several people from Europe. It was a good day.

And it was topped off by dinner at the Hotel Wawona. I was so happy to be back in that classic old dining room, awash in memories. Sometimes I would go to Yosemite by myself to get a taste of real fall — I loved having breakfast there.

My dinner was just okay — it was probably dumb to order pasta primavera in October! But Mtuseni had one of his best meals of the trip: a massive hunk of pot roast with gravy, potatoes, and veggies — a perfect autumn dish. 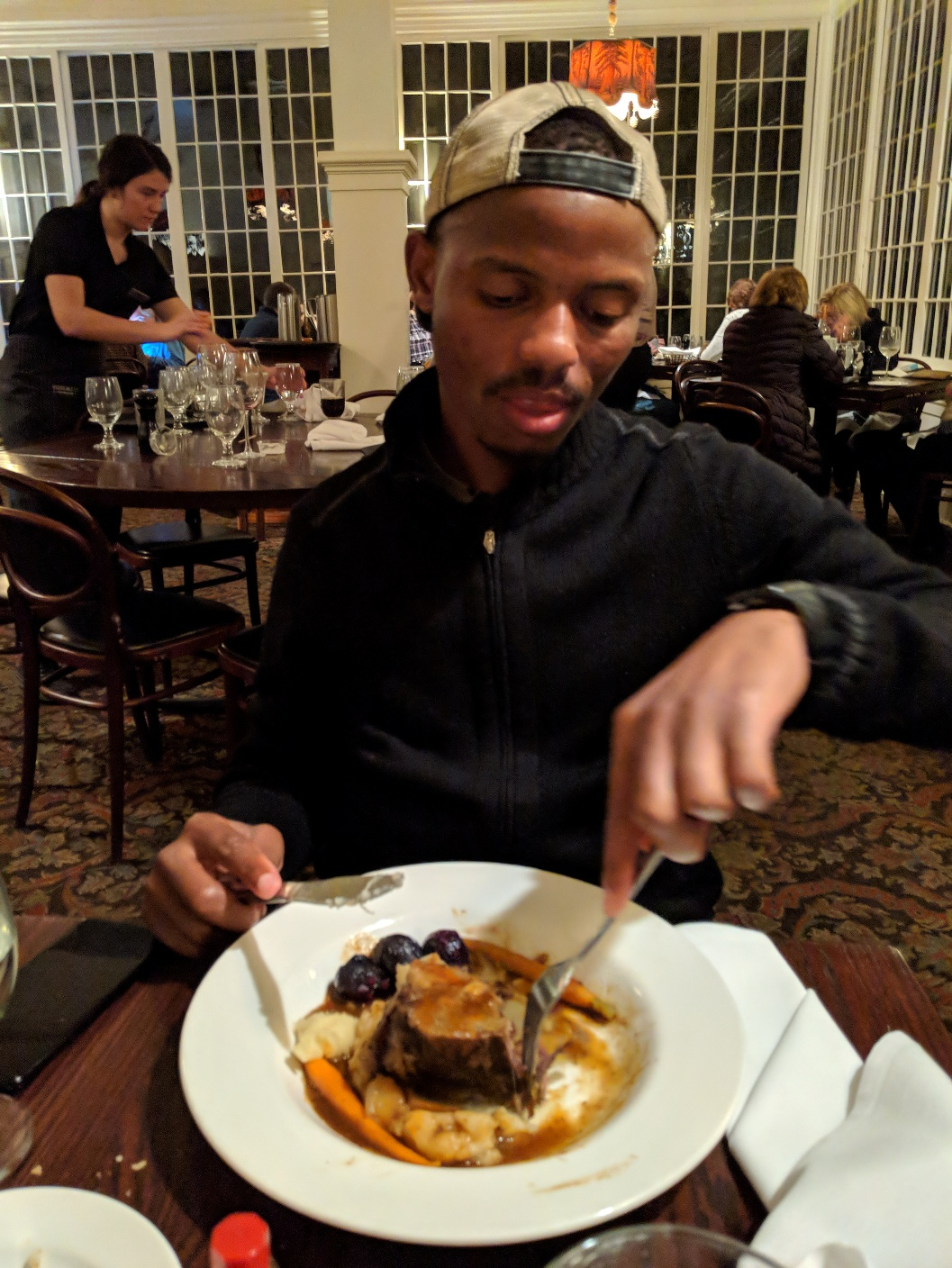 The classic dining room at the Hotel Wawona. And a well-earned hearty hiker’s meal!

I was kicking myself that I didn’t order it. He dug in heartily — though with his refined South African use of cutlery — and finally offered me his very last bite. I laughed and declined. After that hike, he’d earned it. 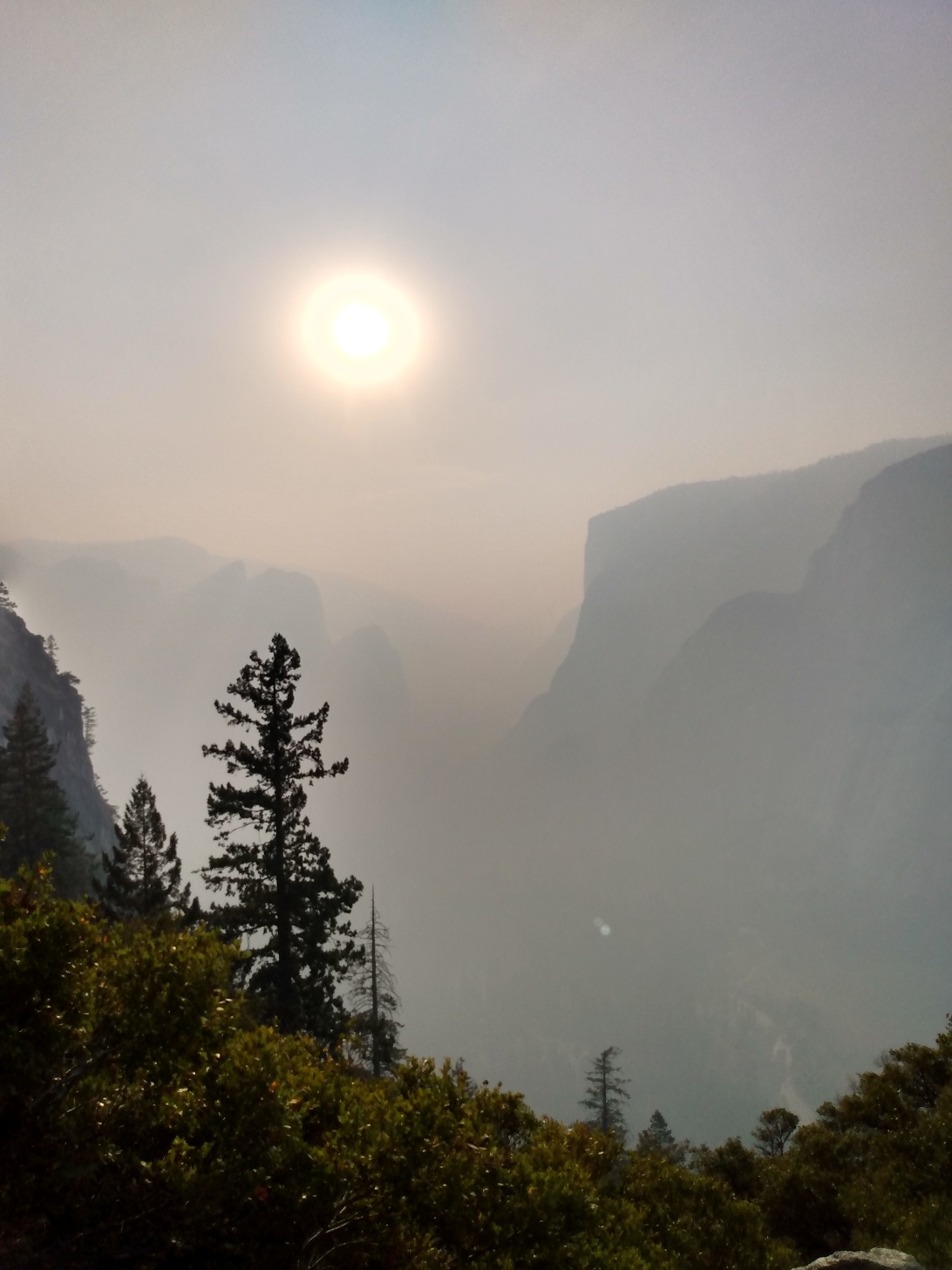 Another hazy sun view from the Four Mile Trail. Would the skies clear for our final day in Yosemite tomorrow?

What do you think?... Cancel reply

I'm crafting the next act for my life, guided by my mantra: Explore. Discover. Share. Enlighten. Empower. Inspire. Come along for the ride!