San Francisco. The City by the Bay. My old haunt. I was so looking forward to this leg — I had the best decade of my life here (so far, at least). And I’d really talked up the place to Museni. So I was stunned that it turned out to be one of the few low points of the whole trip. (Not the lowest; that accolade goes to Montgomery — aside from being able to celebrate Mtuseni’s birthday there.)

I set aside a longer stretch of days here than usual, because I wanted to show Mtuseni everything. And being so far apart, we’re continually learning about each other. This would give him a chance to witness my life in my 30s… when I was only a few years older than he is now. And of course, I wanted to see old friends.

We parked downtown and walked to Powell and Market streets, where the cable cars turn around. Right away I felt something was off. The streets were oddly quiet for a Saturday. And they were filthy. And smelled like piss and shit. And there were so many homeless people camped out. Now, there were homeless when I lived there in the 90s; I was regularly panhandled every other block. But this was another level entirely. And everything felt flat. Even the tourists lined up for the cable car seemed oddly subdued.

As we walked down Market to grab a car at California Street, I kept saying, “Where is everybody? What’s wrong?” Mtuseni could see how perplexed and unnerved I was — and he’s not known for being emotionally perceptive.

My commute to work, which I usually walked. No wonder I was in such good shape back then — I had to climb Nob Hill whenever I went home!

We hopped on a cable car and the familiar rock and grind and clanging bell made me feel a little better. Nothing can spoil that view as the car climbs up Nob Hill and you can see the Bay Bridge. This was my commute to work — by cable or foot — and not once was I unmoved by it. I took that ride one last time the night before I moved away, and cried.

On the cable car. It took some convincing, but I finally got Mtuseni to stand on the running board. That’s the best part! Once he did, he got it. 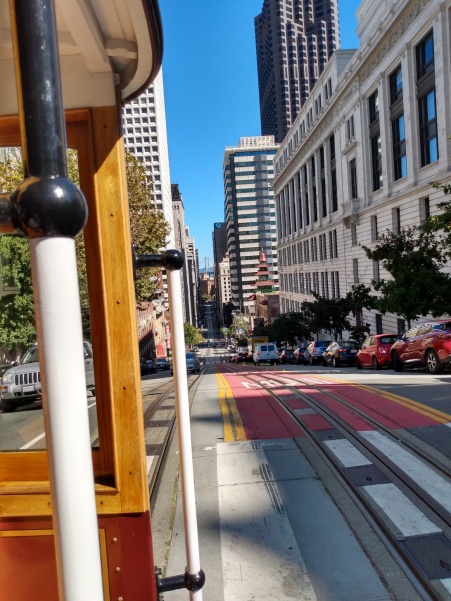 This view down my street on the way to work never got old.

But at the top of the hill, my local park across from Grace Cathedral seemed small. My old apartment building was covered in grime. The sweet Chinese couple who owned it back in my day never let that happen. (And I paid $600 for a one bedroom with parquet floors and stained glass!) My local grocery store with the freaky, upside down parabolic roof was gone, split into a Trader Joe’s and CVS.

My friend Kelly, our crazy host in Los Alamos, moved away from San Francisco a few days after this was taken outside 1271. I left a week later. Note how grime-free my building was!

And it hit me — my life there was long, long ago. And by the time I had left, I was ready to go. I’d gotten everything I wanted out of the place. That didn’t completely surprise me. The last time I visited 15 years ago, I had the same “been here, done this” feeling. But the city still had that quirky, nowhere-else-but-San Francisco energy back then. Now it was gone.

I loved the Crowbar in North Beach! It had great beers and a killer juke box of punk and alt-rock! Seeing this sign crushed me. You can’t go home again.

I described the feeling to my friend Patricia in Silly Valley, who was my upstairs neighbor on Nob Hill. “What happened to the city?” I asked. “Something feels off. I can’t put my finger on it.”

She captured it perfectly. And this fact combined with it no longer feeling like home, not even nostalgically, made me sad. I was in a funk and just went through the motions the rest of the visit. I barely took any photos. If we didn’t have social events planned with friends I would have left after a day. These get-togethers were the highlight of the visit. And I realize that what made my 30s so wonderful wasn’t the place, but the people. If I could carry them around in my pocket wherever I go in life, I would.

It’s so great to be able to pick up like no time has passed — and to have a new face in the gang! Sometimes, it’s the people that make a place.

Mtuseni and I did have a couple of nice times on our own. At dinner in a North Beach trattoria, I noticed the imported goods on the walls and remembered that I’d been there with my parents in the early 90s. As I’d just lost my father a few months earlier, it was a nice memory and felt like dad was with us on the trip for a moment.

It wasn’t until I looked up from my wine and saw the products on the wall that I remembered being here with my parents in the early 90s.

And my favorite little pub on Polk Street was still there — and hadn’t changed a bit. Thank god! I had so many laughs and heart-to-heart talks over burgers and pints at The Bell. A quick walk from my apartment, it felt like my Cheers — though nobody ever knew my name. (I don’t need that. Boundaries!) I ordered a cheeseburger, which I rarely eat these days, and it was exactly the same — right down to the pickle spear! I ate every bite. 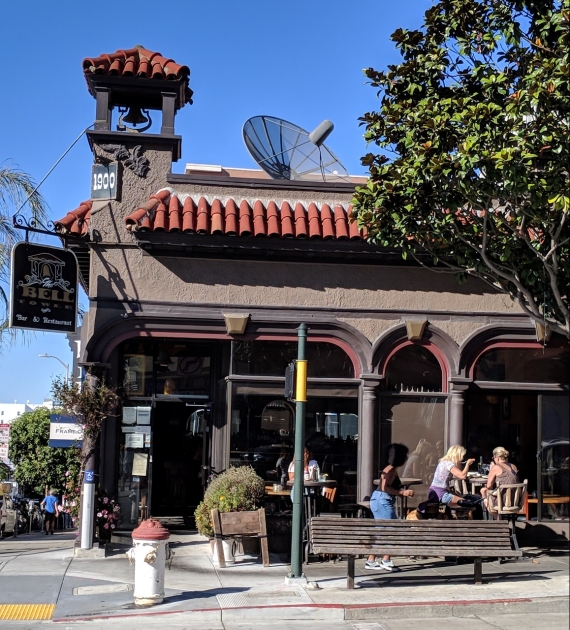 How many times did I walk to The Bell — and sometimes stumble home from The Bell! I love this place… so happy it’s still here.

I told Mtuseni about all the times I’d been there — often with Annie and Kelly and other friends he met along the trip. I was able to show him a slice of my life as a young guy. He saw me in another dimension — and could possibly see a life of fun and freedom for himself in his next decade. And in the end, that made the San Francisco visit worthwhile. 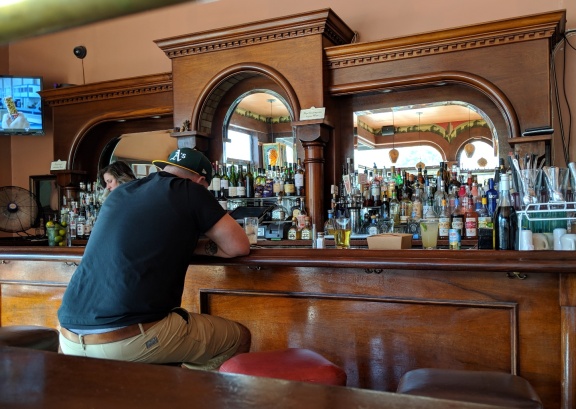 I downed many pints, had many laughs, and talked through — and listened to — many dramas and traumas at this bar.

When we finally left for Yosemite, I watched the skyline fade in the rearview mirror and said goodbye. I knew that chapter of my life was forever closed. But I’ll always be grateful. I learned how to be me in San Francisco. I learned how to live. Everyone should have a chance to do that.

A few years ago an old friend created the light show on the Bay Bridge, which I could see from my office right on the water. I think those lights would have bugged me after a while.

What do you think?... Cancel reply

I'm crafting the next act for my life, guided by my mantra: Explore. Discover. Share. Enlighten. Empower. Inspire. Come along for the ride!